The Herald Sun came under international scrutiny this week after they published a highly racialised cartoon. Owned by Rupert Murdoch’s News Corp Australia, this is not the first time the media outlet has been under the spotlight for questionable content.

This is not the first time their cartoonist, Mark Knight, has been called out for racism. In fact, it was only last month that he was being criticised for a racist depiction of African-Australians.

And so, once again the Australian media’s How Is That Racist alarms have been triggered.

I’m not going to waste energy on those that continue to deny that racism is an issue in Australia. It is a widespread occurrence that will won’t disappear by being polite to racists or giving them a platform.

And I’m not going to waste time considering a racist’s point of view or the fallout they have faced due to their actions. When hate is used to dehumanize others, regardless of intent, it needs to be called out.

In Australia, racism is everywhere, every day. From systemic racism to personal interactions. Race-based hate is undeniably harmful. It impacts on a person’s health and social and economic well-being, and has a measurable cost to Australia’s economy.

Whilst racism is widespread, there are a few places where it habitually sparks heated public debate, such as in sports and policing.

The debate over Serena Williams’ reaction to an overzealous adherence to ‘the rules’ at the US Women’s Open is similar to what Adam Goodes endured in Australian football. Within this debate, and Knight’s cartoon, there’s the not-so-subtle racist message: never forget your place.

This connection between racism and standing up to authority is also seen too many times in Australia though racial profiling in policing. And is the cause of far too many Aboriginal and Torres Strait Islander deaths in custody and deaths in police presence (i.e. police pursuits, which are often the result of racial profiling).

Systemic racism within Australian justice systems is unquestionably harmful. Added to entrenched generational fears due to apartheid-like incarceration of Aboriginal and Torres Strait Islander people in government missions and the forced removal of children, there are valid reasons why some people feel threatened by police presence.

And for these reasons, and many more, racist cartoons need to be called out. Australia cannot address the rising personal and social cost of racism if those who are not the targets of racists continue to make excuses for those who choose to engage in this race-based hate.

If you do not know why Knight’s cartoon was racist, which frankly I find very hard to believe, then it is your responsibility to educate yourself.

There have been numerous articles already written about Knight’s cartoon, including from an African-American women’s perspectives. Others have noted how Knight attempted to erase Naomi Osaka’s Japanese-Haitian heritage. I suspect he purposely used Naomi to take a shot at another black woman, by depicting her as a victimised slim white woman. This enabled Knight to paint Serena Williams as an angry black woman.

Knight’s anti-blackness cartoon is an example of misogynoir—the intersection of sexism and racism. It evokes the Sapphire caricature, as well as Jim Crow.

The condemnation of Knight’s cartoon is also reminiscent of images that racialise and stereotype Aboriginal Australians for political purposes.

In the Meanjin Winter 2018 issue, Liz Connor wrote an article that is very applicable to the few who are in support of Knight. This article also unpacks racist imagery of Aboriginal women. And includes the prophetic comment ‘No-one does identity politics quite like resentful white men’—all the while bemoaning it.

Australia was invaded by a foreign nation that had a false sense of superiority. The violence of colonisation has never been resolved. As a settler-colonial nation, ethnocentric views are woven in the constitution, laws, institutions and social systems. Some days, it feels like we’ve made no progress as a nation, instead constantly dragging the rotting remnants of colonisation and the white Australia era.

And, then, signs of hope emerge. Whilst the echo chamber rings with the sounds of the uninformed rallying around Knight, one brave Australian cartoonist demonstrated that the art of satirical cartoons is not quite dead.

The global condemnation of Knight’s cartoon sends a strong message: hate will not win. 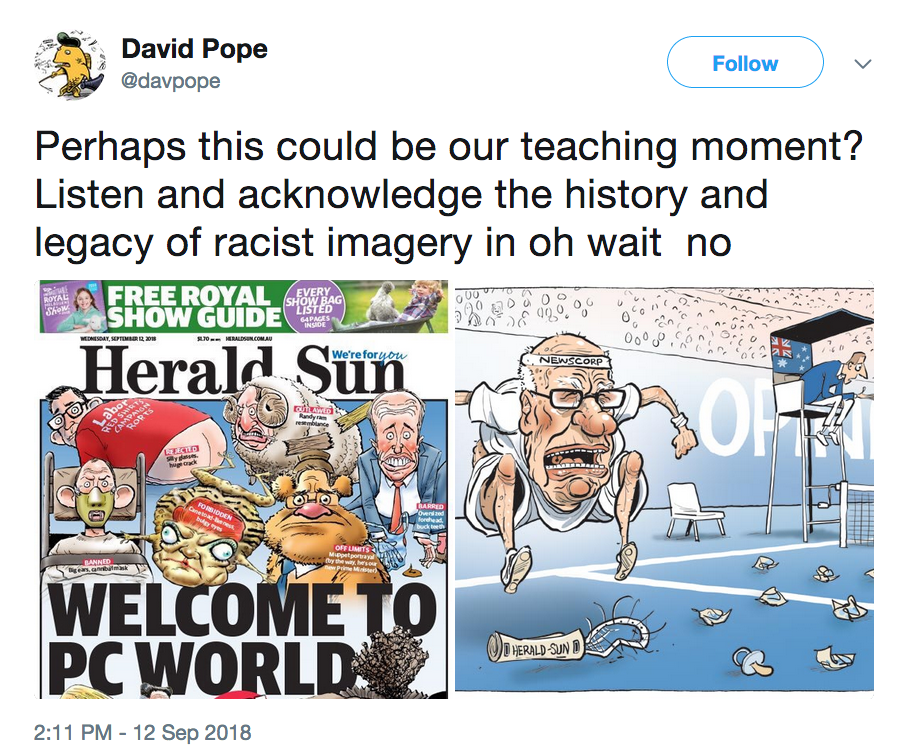 Karen Wyld is an author and freelance writer of Aboriginal descent (Martu). She was short-listed in the 2017 Richell Prize, and is the inaugural recipient of the Hardcopy First Nations Australia Writers Scholarship. Karen has op-eds published in Indigenous X, NITV Online, Al Jazeera and the Guardian.