O the sad but perfect irony of me being asked to write about my friend Brian John’s legacy for Meanjin online just a few days after his death. He, who rarely spoke about himself, would not have approved.

He loved small magazines like Meanjin, believing them to be essential, doing what he could to ensure their support. Meanjin’s quarterly essay, was funded through the CAL’s Cultural Fund which he chaired for many years. We were both on the magazine’s Advisory Committee and at different times on the MUP Board – his contribution, unlike mine, never wavering. 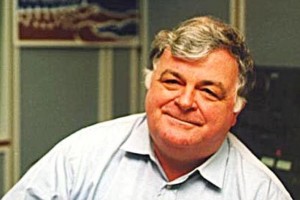 Soon after he arrived in Melbourne in 1979 to take up the job of publishing director at Penguin, he sought out Di Gribble and me. McPhee Gribble was then in a shabby three storey terrace house in Carlton with a childcare department on the ground floor, itinerant writers and another small publisher renting rooms from us on the third, and a vast front room with a balcony in the middle, perfect for producing books and having parties.

Penguin Books was then a long way out of town on the Maroondah Highway and our offices in Drummond Street, Carlton and later in Fitzroy became a sort of end of week staging post for Brian. Every Friday night, first in the office then in the pub and at dinner somewhere later, we’d argue ideas and politics and ways to make things happen.

Brian read and discussed what we published and pressed copies on his friends. Word-of-mouth we called it, knowing it was superior to any marketing campaign and Brian was a master of good talk. We did the same for his list at Penguin when his revolution began and Penguin was open for original fiction and opinionated non-fiction and polemic. He published Elizabeth Jolley, Blanche d’Alpuget, Thea Astley, David Ireland, Rodney Hall and Frank Moorhouse and many more besides. Henry Reynolds brought him The Other Side of the Frontier, Bernard Smith, The Boy Aeodatus and he commissioned remarkable books like John Bryson’s Evil Angels, the account of the Lindy Chamberlain case, and Richard Haese’s Rebels and Precursors about Modernist painters.

His contacts were second to none and reflected his years in the office of Prime Minister and Cabinet under Whitlam then Fraser, and his skills as a journalist. He insisted his friends should know each other so Sydney became our town as well. These were the Hawke and Keating years in the run-up to the Bicentennial and all of us were honing our imaginations and sense of the place, stretching the limits of what was possible in theatre and film and cultural policy making, The diversity of Australian stories became a favourite mantra.

Brian was appointed head of the SBS in 1987 and we all cheered and danced late into the night. Broadcast media was where he was meant to be. At McPhee Gribble we were about to expand our staff and our publishing when the economic downturn, Keatings’ ‘recession we had to have’ started to bite and Penguin’s policy towards us inevitably changed. McPhee Gribble was eventually absorbed into Penguin and I moved on, becoming a few years later chair of the Australia Council with a brief to overhaul it. Diana started Text Media with Eric Beecher. Brian became head of the Australian Broadcasting Authority.

We shared the same Ministers for Communications and the Arts, Michael Lee, under Keating, and then Richard Alston, Howard’s Minister for Communications and the Arts – sometimes meeting in the outer offices, sometimes in the lift, giving each other the thumbs up as we went in to argue policy and funding for creativity and multimedia convergence. Creative Nation was released in October 1994 with its $252 million in additional spending for the arts and multimedia.

And in 1995 Brian became Managing Director of the ABC, the role he was made for and had set his sights on years before. Diana became a director and eventually his deputy chair. Reading and publishing books, broadcasting and making cultural policy that enabled new work by writers and artists and performers were all part of the same thing, we told each other whenever we met.

The force of ideas Brian called it.

We’d argue pictures as we argued books. He’d often ring wanting a weekend going around the galleries to see the work of an artist he wanted to share – Jan Senbergs, Rick Amor, Lloyd Rees, William Robinson, Peter Booth, Colin Lanceley, Rosie Gascoigne. His taste was wide and discerning. Many of them were friends.

So much I learnt from him.

I first heard of mango-mouth from Brian describing his childhood in Gordonsvale, Queensland where his father was a wharfie and a barber and where the kids climbed mango trees and feasted until their lips were red and swollen.

I first heard of the One True Faith from him too, he who had spent three years from the age of sixteen in a Sydney seminary with several of his friends who’d remained in the priesthood. Brian liked late at night to make non-believers and vacillating protestants feel like heathens covered in woad stumbling through the dark without a compass.

Brian’s moral compass was unwavering. A modest man whose interest in other people was vast, he would describe the trajectory of his life’s work with a dismissive gesture of both hands as ‘a bit of this and a bit of that’.

His legacy is formidable and every aspect of broadcasting is steeped in it. Mark Scott delivering the Inaugural Brian Johns AO Lecture last September paid homage to his foresight. ‘In the infancy of the internet, a decade before broadband, Brian realised that traditional broadcast platforms would converge to create an audience experience based solely on content.’ ‘One ABC’ was born – a great public broadcaster in a digital age.

These days my New Years Eve’s are as austere and solitary as I can make them – superstitious about first footings and seeing the New Year in with a good whisky outside under the night sky.

This time I was thinking much about Brian and the recent message he’d left on my phone apologising for being ‘rather elusive, having been in a bit of a muck’. We had spoken later about the muck he was in and his beloved Sarah’s heroism and when he might be well enough to be up for a visit from me. I reminded him of how he had come to see me in intensive care a long time ago when I woke to find him standing by the bed, his rumpled face pale with concern, calling me a silly little Scottish sheila, like he often did, making me laugh, making me somehow determined to recover and get back into the great heady game of it all.

But I didn’t make it to Sydney and Brian died at dawn on New Year’s morning.