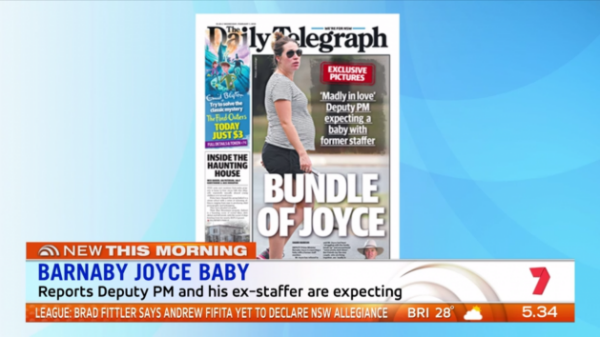 The public space we call ‘the media’ has changed drastically over the last 20 years. I have been arguing for most of that time—to a mixed reception—that journalists need to take their audiences much more into their confidence, not just once the stories are written, but about the way in which journalistic decisions are made in the first place. The current Barnaby Joyce saga has brought to the fore just how uncomfortable many journalists are with that idea and how we haven’t really worked out what the new rules are.

Joyce, the leader of the National Party and the Deputy Prime Minister, was forced to a by-election in December last year when it was found he was in violation of the Australian constitution’s citizenship rules.

He convincingly won the election, aided by the fact that his strongest potential opponent, independent candidate Tony Windsor, decided not to run. During the campaign, however, there was chat that something untoward was going on, that Joyce was having an affair with a member of his staff. Windsor himself hinted that there were darker stories afoot, though he wouldn’t give any details.

Eventually it was revealed that Joyce had left his wife, that she and their daughters were devastated, and that the staffer in question was pregnant with Joyce’s child. Some smaller publications—Independent Australia and True Crime News Weekly—discussed the matter openly, well before the by-election, but the mainstream media had largely steered clear.

Readers asked, quite reasonably, why this information hadn’t been revealed earlier, and they were treated to various explanations by different journalists. Jacqueline Maley argued in the Sydney Morning Herald that although most of the press gallery and the parliament in general had known about the affair for some time, they were right not to report on them. ‘The reasons were less conspiratorial than they were journalistic,’ she wrote, ‘we couldn’t stand it up…Within our newsroom, there was debate over what resources, if any, should be devoted to confirm the rumours.’

In The Guardian, journalist Gay Alcorn called this argument ‘disingenuous’, pointing out that newsrooms could find the money to cover stories about cooking shows when they wanted to. She also said that she ‘was in the camp that found it all distasteful, questioning whether Joyce’s private life was the public’s business,’ but went to say that she was wrong about that ‘and there remain questions that should be pursued’.

Julia Baird pointed out the double standard that applied, saying no female politician would have been accorded the same hands-off treatment that Joyce had received: ‘If it were…a married female party leader and deputy prime minister who became pregnant to a younger staffer, the story would have been pursued with great vigour and determination months ago.’

Crikey asked a number of journalists and editors for their opinions and received a mixed response. The editor of the Telegraph, the paper that finally ‘broke’ the story, unsurprisingly supported publication once they were ‘100% sure of the facts’. Crikey’s own Bernard Keane was of the opposite view, saying the story was ‘shameful non-journalism and debases public life’.

Journalist and academic Margaret Simons offered a more nuanced take on the issues involved, but basically concurred with Keane. Former Australian media columnist, Mark Day, said that, ‘The media has a duty to tell it like it is’, while managing editor of Junkee, Rob Stott, said that ‘My only question is why now? If the story is newsworthy now, surely it was newsworthy months ago when the entire Canberra Press Gallery knew about it.’

So where does all this leave us?

As information has continued to emerge, it appears that there were grounds for pursuing the matter much harder much earlier, including questions over the improper use of public funds.  Surely, ‘information has continued to emerge’ is the very definition of ‘we should have looked harder’, so to me, that alone suggests the media got the call wrong. Still, the issue at hand is less to do with that than with the still-unclear new rules I mentioned. This is ultimately a story about journalism itself and how it fulfills its mandate as a fourth estate.

What the Joyce story makes clear is that traditional media ‘rules’ about such matters are farcical. They were as much about protecting the political class as having anything to do with journalism’s higher purpose. They were forged in a different era and were often tainted with white-male presumptions from a time when white males ran everything. If there was ever any consistency in their application, there isn’t now. And there is as much disagreement within the mainstream media about what the rules are as there is between journalists and their audiences.

This doesn’t mean that there shouldn’t be guidelines and levels of professionalism, and certainly journalists need to confirm information before they publish it. But the point is, given how hard it is to apply such rules consistently, journalists need to do a much better job of explaining how they are being applied. (Even as I write this there are new stories speculating about whether Joyce will remain leader and about another incident involving Joyce being drunk and pinching a woman’s bottom. Why is such speculation now okay, when it wasn’t a moment ago?)

The norms of traditional journalism simply have to change.

Platforms such as YouTube, Facebook and Twitter, and the old media of television, radio and newspapers now coexist. Journalism happens in a hybrid environment, where traditional ways of reporting mingle online with the actions and habits of an audience able themselves to shape, distribute and create content. This new space brings together amateurs and professionals in a way that wasn’t previously possible and creates new and different relationships of power between media and politicians and, most importantly, between the media and their audience. Audiences can no longer be walled off from the processes of journalism itself.

This means that the way in which journalists report is now part of a constant negotiation, one that is not the sole domain of journalists. The audience is involved in that conversation, and that’s how it should be. Our opinion of what matters matters. Journalists can no longer act as if they still hold some aloof and lofty position of judgment, and that the final word rests with them. They no longer get to do their ethical thinking behind closed doors.

Gallery journalist Katharine Murphy, who wrote one of the best pieces about all this, was heading in the right direction when she talked about transparency. In explaining her reluctance to engage with the Joyce story she said, ‘Normally I wouldn’t take you into the sausage factory because the story is what matters, not the story behind it. But given there’s widespread distrust—in institutions, of journalists, of politicians—transparency, consistent with respecting my own professional obligations, is important.’

Her piece is valuable precisely because it does take us into the sausage factory. It treats the audience with the respect they deserve, and helps us understand the decisions she made.  Where I disagree with her is when she says the story behind the story doesn’t matter. It does matter, it matters vitally, and so much of the angst and dissatisfaction over the Joyce saga story could’ve been avoided if more journalists had taken the time to explain their thinking earlier.

So much of the anger directed at journalists from audiences on social media originates in the fact that journalists still pretend they have exclusive control over that thing we call ‘the news’ when everyone can see that they don’t. When stories like the Joyce saga break—or don’t break—journalists can’t pretend we can’t see what is going on and then hide behind outdated professional practices as an excuse for not addressing them in a way that the audience expects.  That doesn’t always mean giving the audience what they want; but it does mean talking to them about whatever decision is made.

In the hybrid space of social media, where journalists and their audiences rub shoulders and can argue the toss about news values—about what counts and what doesn’t—the decision about what to publish and how to cover it no longer belongs exclusively to journalists and editors. This is not just a good thing, it is an essential precondition for the proper functioning of a free press.

Tim Dunlop is an author and writer. His new book, The Future of Everything: A Big, Audacious Agenda for Change, is due out in September. You can follow him on Twitter @timdunlop