When a politician says ‘Trust me’, it already sounds like the end of a bad joke. But this—this was something else. After weeks of a rolling snafu whose signature aspect has been parliamentarians fucking up, here was a parliamentarian saying it was unfair to assume that parliamentarians might have fucked up. 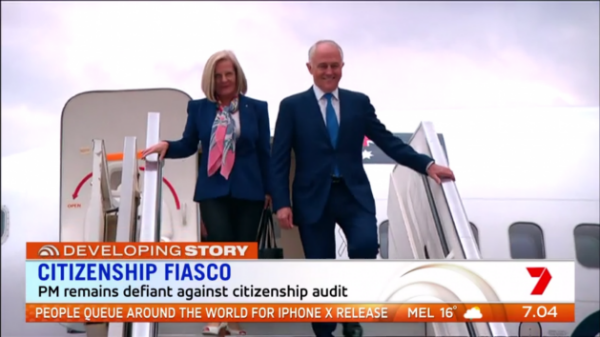 This was government minister Mathias Cormann on Sunday, claiming that sitting members shouldn’t have their citizenship scrutinised. It’s an uncomfortable position to argue from when six members have just been booted out by the High Court for being undisclosed dual nationals. It gets thornier when one of those was Deputy Prime Minister. Some extra itch arrives when a seventh friend decides that maybe the judgement applied to him too, and the Savlon is really needed the day after your speech, when an eighth candidate for the chopping block gingerly asks if he can have a word.

This is how the farce has revealed itself: gradually, grudgingly, with revelations from MPs and senators only when they have no way out. The two Greens who started the avalanche left promptly and willingly. The rest have clung on like stale farts to sharehouse upholstery.

Amidst it all, the gall of a man whose Coalition has provided three of the sacked with a fourth in the pipeline, to say that no further accountability was owed. ‘I don’t believe that in the absence of any evidence whatsoever that a member of Parliament or any member of the community should be put in a position where they have got to prove their innocence,’ was Cormann’s muddy scramble toward some distant moral knoll.

This, after media outlets and civilian investigators have provided the evidence all along. After his ineligible colleagues needed external pressure to admit fault. After his honour system had failed and the resulting sideshow had dominated government for weeks; an epic waste of time, resources, and opportunity from those supposed to be running the joint.

Two days earlier, the Prime Minister took the same tack. ‘We are not going to engage in some kind of national witch hunt,’ was the Turnbull formulation. The thing about witch hunts, Malcolm, is that witches tend to be pretty fucking thin on the ground. You have to accuse blameless villagers, which makes the outcome less than equitable. Finding people who’ve actually done something wrong falls under due diligence.

Turnbull gave the impression of backing down by Monday, announcing a new citizenship declaration, but this is basically identical to the one they already can’t get right. Even his limp compromise came belatedly and under duress. It’s not hard to guess why, as Barnaby Joyce scrambles to recover Turnbull’s one-seat majority in a by-election, and John Alexander is in doubt as the Liberal member for Bennelong. Should an audit knock out a couple more in the lower house, there won’t be a Coalition Government. If more are ineligible, it’s in the party’s interest to find them slowly. It defies belief that resisting scrutiny was ever about principle.

Cormann’s formulation was guilt versus evidence, but no one is accused of a crime. They’re proving qualification for a lucrative and privileged position. If a job interviewer asks whether you really designed the Opera House, you don’t yell that you’re innocent until proven otherwise. There’s a reason we have referees, diplomas, licences. Imagine a hospital saying, ‘Well, it’s up to each surgeon to assess for themselves whether they’re accredited. They’ll come forward if any of them find reason to doubt their credentials.’

The position isn’t just privileged, it’s meant to be one of service. We, the people, pay its wages. Joyce, Stephen Parry, and Fiona Nash each sat in parliament 13 years, drawing millions of dollars for which they weren’t eligible. They’ve made policy throughout that time, voting on legislation which they weren’t constitutionally allowed to influence. There has been no thought of rescinding bills passed by void votes, nor recouping taxpayer cash. But what really grates is how put upon and graceless these plonkers have been about fixing up their own mess.

The Greens senators recognised their mistake and cost nothing further than the pay they had drawn. The rest of the mob caused the expense of examination by a High Court full bench, Commonwealth legal fees of God knows what scale, and now Joyce assumes the right to waltz into a by-election. His shitty admin skills have cost taxpayers literal millions, yet there has been no true apology, no acceptance of wrongdoing, just a kind of ‘Poor old Barney’ shrug and grin before sniffing back to the same fat salary. The rest have presented themselves similarly as unlucky victims of bad legislation. There is no recourse, no remorse, no responsibility. And these are the people Cormann wants us to rely on.

There is zero accountability for politicians in the most privileged positions. But when average punters get a Centrelink form wrong, these same conservatives want them smashed without remorse. Or you can fill out your forms right, and still have the world’s worst robot invent a crippling debt in your name. When those thousands of bullshit debts are issued by our welfare system, it’s up to the accused to prove their innocence, having to provide documents from years in the past that they may no longer own, and negotiate a labyrinth of bureaucracy to get the lie revoked.

‘Unless there is evidence that someone is in breach…’ trails off Cormann. Yeah mate, great story. Innocent until proven guilty doesn’t apply if you’re poor. If you want to talk witch hunts, start there. Some other examples of things irrationally vilified by the Coalition: renewable energy, the CSIRO, the Human Rights Commission, the Bureau of Meteorology, the ABC, a rotating cast of journalists, and a bunch of terrified blokes on Manus Island.

In rejecting various pleas of citizenship ignorance, the High Court made this note: ‘A candidate need show no greater diligence in relation to the timely discovery of these facts than the person who has successfully, albeit belatedly, brought them to the attention of the Parliament.’ But aside from being struck off, which can be very short-term, those candidates faced no repercussions.

Turnbull’s new measures only repeat what already exists. List your birthplace and date, and that of your parents. If you are or were a foreign citizen. Questions laced with caveats: ‘to the best of your belief’.  There is no one checking what these details imply or if they’re true. Again, that job falls to the media or public, who can’t access personal papers. One can fill out that form with the same cheerful ignorance as before, claim that ignorance if uncovered, and still face no likely penalty.