Writing for June Meanjin (in shops June 19, or subscribe), Ryan O’Neill tells of an extraordinary discovery: the lost, quietly tragic, tale of Maud Hepplestone, and her collection The Songs of the Kookaburra, a work celebrated as a masterwork of modernism, when its author intended anything but.

Ryan takes up the tale:

‘Australian poetry was once memorably characterised by the poet John Forbes as ‘a knife fight in a phone booth’, and one of the earliest twists of the blade can be found in Maud Hepplestone’s collection, Songs of the Kookaburra. Like almost all dead Australian poets (and most living ones), Hepplestone’s work is obscure and forgotten. I first came across her poetry in 2007 in a yellowed copy of a long-defunct journal, The Swagman’s Muse, while carrying out research for my PhD. The July 1921 issue was dedicated to ‘Australia’s Three Greatest Bush Poets’, Henry Lawson, Banjo Paterson and Maud Hepplestone. I had never heard of Hepplestone, and I spent a few moments glancing over her poem ‘Australia Bright and Beautiful’. Although I had read a little bush poetry I was not an admirer of the form, and Hepplestone’s verse, of which the following is a representative sample, did little to change my mind:

The gum trees in the paddocks, the stockman in his shack
The swagman at his billabong, blue heeler at his back
The farmer and his lovely lass, a rustic Aphrodite,
For all of these and more I thank our maker, the Almighty.

I should have forgotten Hepplestone the moment I finished her poem if she had not concluded with the triumphant lines ‘Let us never lose our faith in His most excellent plan / Australia now, and ever will, belong to the White Man!’ Hepplestone’s nationalism and racism were not, of course, unusual for her time, but the last couplet of ‘Australia Bright and Beautiful’ was sufficiently unpleasant to cause her name to lodge in my memory.

A year later, when I happened upon a footnote in Twentieth Century Australian Poetry (1999) that mentioned ‘Maud Hepplestone’s radically experimental collection, Songs of the Kookaburra’, I was intrigued enough to place a special order to borrow the volume from the University of Adelaide. When the book, a slim volume, arrived weeks later, I glanced at the contents page, which bore titles such as ‘The Swagman’s Lament’, ‘The Bush Wedding Party’ and ‘Willy Wagtails in Wagga Wagga’. But when I turned the pages to begin reading the poems, I discovered the other pages of the book were entirely blank. Puzzled, I ordered a different copy, from the ANU library, and this too consisted of a contents page and blank pages. The question of Hepplestone’s book nagged at me for weeks, and I’m indebted to Vincent Buckley, in whose Studies in Australian Poetry (1957) I found the solution to the mystery. 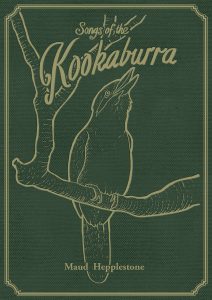 In his essay ‘Jindyworobaks, Angry Penguins and Songs of the Kookaburra’ Buckley describes how Maud Hepplestone became unwittingly trapped in Australian poetry’s phone booth. By the late 1920s, Hepplestone’s bush ballads had gone out of fashion as modernism made its belated mark on Australian literature, and she was unable to find a publisher for her latest work. Undaunted, she turned to vanity publishing to bring forth what she considered to be her masterpiece, Songs of the Kookaburra, a collection of bush ballads that she hoped would surpass the works of Banjo Paterson in the national consciousness.

Unfortunately, Hepplestone, who was better known in Sydney’s literary circles for her parsimony than for her poems, endlessly badgered her printer in an attempt to cut costs, while also insisting on the highest possible production values. She then made the mistake of leaving on a trip to Europe before the book went to press. The printer, annoyed by Hepplestone’s high-handedness, calculated precisely how much work he was required to do for the money he had been paid. This resulted in Songs of the Kookaburra having a handsome back and front cover, a contents page and 64 blank pages.

Upon its publication, Hepplestone’s collection was seized upon by experimental poets as a brilliant subversion of bush poetry, and a demonstration of the form’s exhaustion; there was literally nothing left to say about billies and billabongs and stockmen. Banjo Paterson was furious with Hepplestone, convinced that Songs of the Kookaburra was a deliberate attempt to insult him and his craft. Hepplestone received an angry letter from Paterson in Paris on the same day that a laudatory review of Songs of the Kookaburra by Ezra Pound appeared in the Transatlantic Review. It was in vain for Hepplestone to protest to Paterson and Pound that she was a traditional poet of the bush and that this was all a misunderstanding. Throughout the 1930s Songs of the Kookaburra was praised, decried, admired, despised, annotated and even, on one occasion, burned, the scandal only receding with the advent of the Ern Malley affair in 1943. A mortified Hepplestone never returned to Australia and, as far as I can ascertain, never wrote another poem.

Hepplestone’s Songs of the Kookaburra remains almost completely unknown, even among scholars of Australian literature, and her poems have never been reprinted. And yet, if you were to turn to pages 98 and 99 of the landmark 2011 anthology Australian Poetry since 1788 as I did not long ago, you would find them entirely empty of text. The anthology’s publisher, the University of New South Wales Press, responded to my enquiry about these pages saying they were an unfortunate printing error, understandable if regrettable in such a large book. Still, I can’t help but wonder if this is a sly tribute to Hepplestone and her Songs of the Kookaburra. Whether or not this is the case, one fact remains: Maud Hepplestone is Australia’s greatest writer of blank verse.’